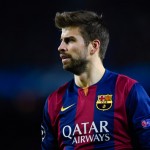 It has been reported that Barcelona defender Gerard Pique is being linked with a return to Manchester United.

The Daily Express reported that United boss Louis van Gaal is hoping to bring Barcelona defender Pique back to Manchester United with a £15m bid.

The Dutch tactician has been forced to call on academy players Tyler Blackett, 20, and Paddy McNair, 19.

And according to today’s reports in Spain, the Red Devils boss has set his sights on a reunion with experienced centre-half Pique, having managed him during his first stint in charge of the La Liga giants.

United are expected to table a £15m bid for Pique, with Chelsea also showing an interest.