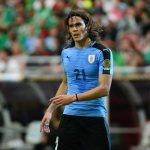 Reports are out claiming that Manchester United boss Jose Mourinho is keeping tabs on Edinson Cavani’s situation at PSG.

Cavani has resisted PSG attempts to open new contract talks in the past week and new coach Unai Emery has made a public plea to him to stay.

AS reported that after landing Zlatan Ibrahimovic, Mourinho is in the market for another striker signing and is eyeing Cavani.

Cavani’s minders, says Le 10 Sport, are touting him around Europe seeking a salary of €9 million.

United chiefs believe they can land Cavani for €50 million.