It has been revealed that Manchester United want to bring Carlo Ancelotti to Old Trafford to help land Real Madrid superstar Cristiano Ronaldo. 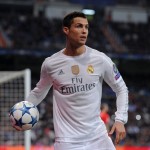 And any deal to bring Ancelotti to Old Trafford would enhance the prospects of Ronaldo returning to the club.

Ancelotti managed Ronaldo at Real Madrid from 2013 up until this summer and the pair forged a strong bond during their time at the Bernabeu.

“He’s an unbelievable person. I just wish every player could have an opportunity to work with him because he’s a fantastic guy, a fantastic coach and I miss him a lot because we won many trophies together,” Ronaldo said last week.

Ancelotti recently hinted he is interested in the possibility of taking over at United: “Of course, for every manager, they would all think of managing Manchester United.”