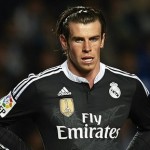 Reports are out claiming that Manchester United coach Ryan Giggs is confident Gareth Bale can handle the pressure in his second season at Real Madrid.

The former Tottenham star has failed to find the back of the net in his last seven appearances for Los Blancos.

“That’s the sort of scrutiny you’re under at a top team,” said Giggs.

“You see Cristiano Ronaldo under pressure because he hasn’t scored for three games.

“His [Bale’s] first season was a massive success and because of that it’s always tough to carry that one the next season.

“I went through it, and you become a better player because of it.”