It has been revealed that Sir Alex Ferguson is supremely confident that Gary Neville will be a hit in his new role as Valencia manager. 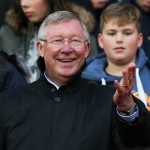 The former Manchester United captain was appointed by the Spanish club on Wednesday following the departure of Nuno Espirito Santo last week and according to his old boss, the 40-year-old has all the qualities required to make it in the coaching caper.

Ferguson told Sky Sports News HQ : “Gary has many attributes that suggest he will be successful in management. His leadership skills are strong, he’s honest and he’s hard working,”.

“He is the type of character who is not afraid of making big decisions, which is a vital skill when leading. I think he’ll do well and I wish him, and his brother Phil, good luck.”

England assistant Neville joins brother Phil, who had been Nuno’s assistant at the Mestalla since the beginning of the 2015/16 season.