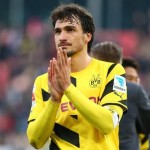 Reports are out claiming that Manchester United have made an opening bid for Borussia Dortmund skipper Mats Hummels.

The German international defender is a major summer market target for United boss Louis van Gaal and expects to move abroad at the end of this season.

BILD says United have now lodged a £21.5 million offer for the Germany international.

However, Van Gaal has a connection with the centre-half, having worked with Hummels, 26, at Bayern Munich.