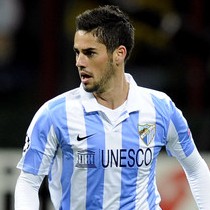 Sensational transfer news are out claiming that Manchester United and Manchester City are being linked with Malaga midfielder Isco.

The Daily Star Sunday reported that the 20 year old Spanish U23 international has been rated at £30million but the buy-out clause in his contract is much less, at £17m.

Francisco Roman Alarcon Suarez – to give him his full name – is making a big impact in the Champions League this season.

That alerted United but now the strongest interest is said to be coming from City.

Arsenal also have been reported in keeping tabs on the progress of the young midfielder.