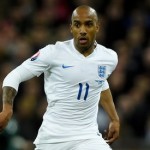 Reports are out claiming that Manchester United are being linked with Aston Villa midfielder Fabian Delph.

The Express & Star reported that Delph will still be courted by the Premier League big guns in the summer, despite signing a new deal until 2019.

The England international, 25, is viewed by Manchester United as a potential signing, as the Red Devils look to replace Michael Carrick.