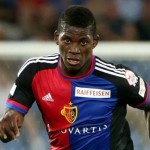 It is said that Peter Braund was posted to Basel’s Europa League clash with Fiorentina by Van Gaal to check on the young Swiss.

United are yet to make a decision on a firm move, but Braund’s presence does show they’re intensifying their interest in Embolo.

Also in attendance on the night was Ariedo Braida, Barcelona’s assistant sports director.

Wolfsburg chief Klaus Allofs also was at the game, having made it no secret they want the striker.

“We make no bones about the fact that we’re watching him,” said Allofs.

Arsenal are also said to be interested in the talented Switzerland international.