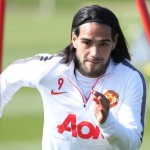 It has been reported that Manchester United will ask Monaco if they can extend their current loan agreement for Radamel Falcao.

The Daily Mirror reports that the Red Devils are eager to assess the Colombian striker further and are set to enquire about an extended loan.

It is believed that United, who took the 29-year old on loan from Monaco last summer, want to retain his services until at least January so they can determined whether or not to spend £43million on a permanent purchase.

Former FC Porto and Atletico Madrid ace Falcao has netted just four goals in 27 appearances in all competitions for the Red Devils but Louis van Gaal wants to keep him around to see if he can rediscover the form that landed him a €60million move to Monaco in the summer of 2013.