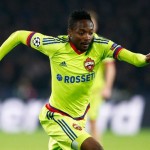 It has been revealed that Manchester United are weighing up a late move for CSKA Moscow’s 23-year-old attacker Ahmed Musa.

The Daily Express claims that United are keen to bolster their attack this month, with Musa near the top of Louis van Gaal’s wishlist.

Premier League leaders Leicester also want to sign the forward and have already reportedly had a £15.1million bid rejected.