Reports have emerged claiming that Manchester United have tabled a massive bid for AS Monaco star Bernardo Silva. 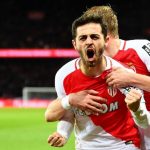 France Football claims that United are now making an offer “that cannot be refused” to sign the playmaker.

Silva is likely to leave the newly-crowned Ligue 1 champions, but there is no indication of the fee Manchester United have tabled.

Jose Mourinho is reportedly ready to splash £200million on signings this summer and Silva could be the first man to be ticked off of his transfer wish list.

The Portuguese boss is intent on revamping his squad in the summer as he looks to push for the Premier League title next season.