It has been revealed that Real Madrid star Cristiano Ronaldo wants to join PSG next season. 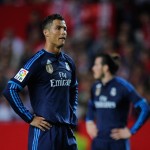 The 30 year old Portuguese international has been linked with PSG and Manchester United for 2016 after falling out with Real management this year.

Sport says his priority is now to make the move to Paris and he’s instructed his agent, Jorge Mendes, to kickoff contract negotiations with PSG president Nasser Al-Khelaifi.

Ronaldo sees the move as his final big payday and will be seeking €18 million-a-year to sign with the French giants. He also expects to maximise his endorsement potential with a raft of new personal sponsorships also being discussed.

He’s now given the green light to Mendes to open talks with PSG about a bank-busting transfer for next summer.

United are also keen, but lag behind PSG in terms of Champions League competitiveness, which has put off the Portuguese.