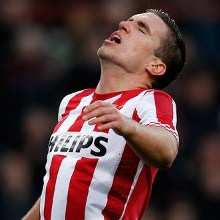 Kevin Strootman has declared that he is in no hurry to leave Dutch giants PSV Eindhoven.

The 22-year old Dutch international is being linked with a winter exit form the Philips Stadion with a number of big European clubs, including Manchester United, showing considerable interest.

However Strootman says he is keen to remain with PSV and achieve success before considering a potential departure in the summer.

Strootman told NUsport : “A move abroad in the winter transfer window is by no means ideal,”.

“That would only give you two weeks to adapt to your new surroundings. If a club really wants me, they will return in the summer.

“And it’s not like I want to leave PSV at all costs in the summer. We will hopefully play in the Champions League again next season.

“Of course, I have ambition and I occasionally discuss certain clubs with my agent, Chiel Dekker, but a transfer is not on my mind all the time. I am happy at PSV and want to win the league title here first.”