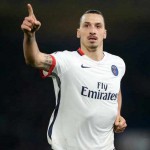 It has been revealed that China could be the next destination for PSG star Zlatan Ibrahimovic.

Ibra is out of contract at the end of the season and looks set to leave the French champions on a free transfer.

The Daily Star says Manchester United have made Ibrahimovic one of their main summer transfer targets while Arsenal and Chelsea are also interested.

But Sky Sports report an unnamed Chinese Super League club have slapped a two-year deal worth £56m on the table.