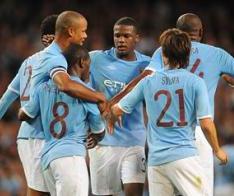 Premier League rich boys Manchester City achieved their goal of reaching the group stages of the Europa League with the minimum of fuss, beating Timisoara 2-0.

Roberto Mancini made five changes from City’s 1-0 first-leg victory in Romania, with blockbuster summer signing Yaya Toure and captain Carlos Tevez both starting on the bench.

Holding a 1-0 advantage from the first leg of the play-off in Romania Roberto Mancini’s side coasted through in front of their own fans.

Former Chelsea winger Shaun-Wright Phillips made the breakthrough and Dedryk Boyata extended their lead with his first goal for the club.


Casillas : Real Must Not Be ‘Obsessed’ With Barcelona!