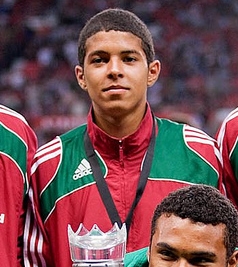 It has been reported that Manchester City have edged out Chelsea to land Brazilian wonderkid Rafael de Souza Rodolfo thanks to a major charm offensive from Robinho.

The striker, 16, is known as Pernao and has been chased by a host of top European clubs, even though he is yet to play for Fluminense’s first team.

It was reported that Manchester City moved fastest of all when they secretly invited Pernao to England last week, where he met fellow Samba star Robinho.

Now boss Mark Hughes is confident of tying up a £3million deal, plus add-ons, after further talks with his club and family.