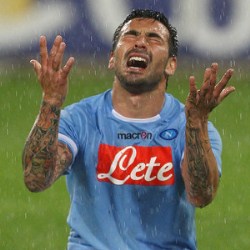 Premier League transfer news are out and it has been revealed that Manchester City boss Roberto Mancini is chasing Napoli star Ezequiel Lavezzi.

Lavezzi, now age 26, is valued at £18million by his Italian club and the Daily Star Sunday revealed that the Premier League rich boys have already held talks about bringing him to Manchester.

As a young player in Argentina, he was hailed as “the new Diego Maradona” because of his skill and chunky build.

But Lavezzi responded to that by stating: “I am not the new Maradona – I am more like Tevez.”

Lavezzi also interests Tottenham and has been linked with Champions League winners Barcelona.

The Argentine international joined Napoli for £6m from San Lorenzo in his home country.