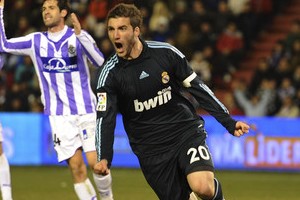 Manchester City are confident that they can land Real Madrid ace Gonzalo Higuain for £25 million in the summer.

It has been reported that the Eastlands side also want to take Fernando Gago off Real’s hands in a £45million double swoop.

Higuain was blamed for his side’s Champions League exit in midweek after missing several chances – one of which left Cristiano Ronaldo visibly furious because he was better placed but did not receive the pass.

Tensions are now running high in the Real dressing-room and City know if one of the two players has to be moved on it will be Higuain looking for another club.

The 22-year-old, Real’s top scorer with 17 goals, has been offered a new contract worth £90,000 a week but that falls way short of what Real’s top earners pocket.