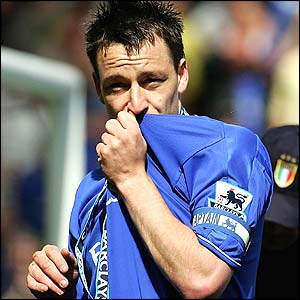 Sensational news are out and it has been reported that cash rich Manchester City is preparing to make an improved offer for England and Chelsea skipper John Terry.

Local newspapers have reported that Manchester City will make an increased bid for Terry this week in their relentless pursuit of the defender whom they believe can bring the club to the next level.

Even with talks of a possible complaint to the Premier League over their conduct in the matter, Manchester City are set to increase the pressure on Stamford Bridge officials to sell the player by adding to their rejected £32m offer.

City manager Mark Hughes has also challenged John Terry publicly to take up the ambitious challenge at Eastlands and this has angered Chelsea.

Now it has been revealed that the club’s super rich owners are thought to be prepared to pay as much as £40m for the inspirational defender.