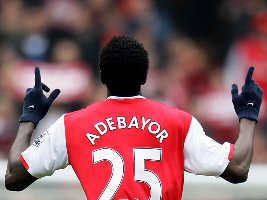 Sensational transfer news are out and it has been reported that Manchester City have completed the signing of Emmanuel Adebayor on a five-year deal.

It has been revealed that the 25-year-old Togo international has joined the Blues from Arsenal for an undisclosed fee after passing his medical at Eastlands on Saturday evening.

It was also reported that several hundred City fans were at the stadium to welcome Adebayor, who hopes to help the ambitious club move forward.

Adebayor told reporters that it made him feel really welcomed and special and that he can’t wait to play for City’s fans and show them what he can do. It is believed that Adebayor will wear the number 25 shirt in Manchester City.

Adebayor also said that he was born to play football and that is what he wants to do and that he have come here to make history for this club and its supporters.

Mark Hughes, meanwhile, has hailed the capture of the striker, who was signed by Gunners boss Arsene Wenger for £3million from Monaco in 2006.

The manager said that Emmanuel has been one of the top forwards in the Premier League since he arrived from France and the club is delighted that he has agreed to come and join us.

Hughes also added that along with the other signings, City have made in the last two windows, Adebayor will greatly enhance Man City’s ability to compete with the top sides.