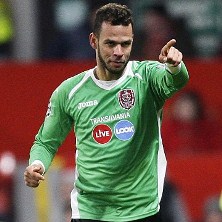 Manchester United warmed up for Sunday’s crucial derby clash with City by going behind for an incredible 15th time this season.

And tonight there was no comeback either as Romanian champions CFR Cluj held on to condemn Sir Alex Ferguson to his 39th defeat in his 200th European Cup match as United boss, and his third in United’s past five European home games.

If there was any meagre consolation at least the winner was not the result of shambolic defending, although Luis Alberto’s magnificent second-half strike still was not enough for Cluj to join United in the last 16.