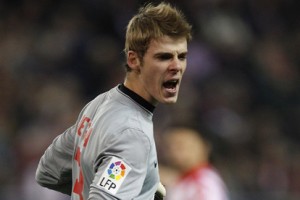 It has been reported that Manchester United approached Atletico about opening negotiations for the 19 year-old and were given short shrift by the Spanish giants.

United were prepared to let De Gea remain at Atletico Madrid for another season, with Edwin van der Sar having recently signed a contract extension to keep him at Old Trafford for another campaign.

In Spain, De Gea is known as ‘Van der Gea’ due to his similarities with the United No1.


I’m Not Great Unless I Win The World Cup – Messi