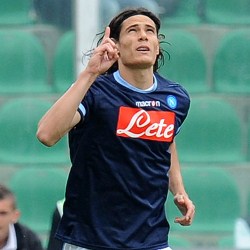 Reports have surfaced that Manchester United have joined the race to sign Napoli star Edinson Cavani.

City coach Attilio Lombardo recently said that the Eastlands club were pursuing Cavani, with Arsenal and Tottenham also connected to the star.

Lombardo told reporters : “I hope there can be some negotiations between Napoli and Manchester City, especially as I’d see one of their three forwards would really suit City,”.

“The trio of Edinson Cavani, Marek Hamsik and Ezequiel Lavezzi would bring success to any club.”

However after word got around that Cavani could be a star in England, Manchester United have reportedly decided they want to make a bid for the star.

While City have a much higher budget than Manchester United, Ferguson has decided that money is no object as they chase Cavani.

Shinji Kagawa Desperate To Prove His Worth At Man Utd