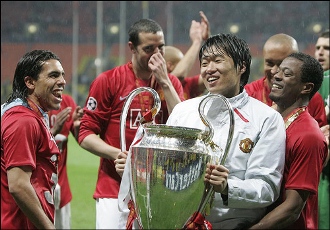 More football news are out and it has been reported that midfield dynamo Park Ji Sung is set to sign a new contract at Manchester United.

It is a wide known fact that the Korean midfielder played a big role in Manchester United’s run to the Champions League final last term and now boss Sir Alex Ferguson wants to reward him for his efforts over the past four seasons.

Sir Alex told reporters that in his time with Mnachester United, Park has developed his technical and tactical abilities and done very well.

Sir Alex also said that Park has become a very important player for Manchester United and had a fantastic career with the club and United chief executive David Gill confirmed a deal for Park is close.

He told reporters that discussions will take place and that the club is looking to extend the contract of Park Ji Sung. He also added that Sir Alex and the coaches are very happy with Park and he enjoys his time with United immensely.

He also went on to say that when the deal is done it will be announced.