Reports have emerged claiming that Manchester United are willing to spend big in January to land a Galactico. 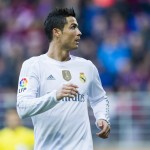 The Sunday Mirror reported that the focus will be on bringing at least one of the world’s stellar players to Old Trafford after Louis van Gaal admitted his current team aren’t good enough to win the Champions League.

Van Gaal and his employers are in agreement that the Reds have lost their X-factor in recent years and have drawn up a wish-list that includes Real Madrid pair Cristiano Ronaldo and Gareth Bale, plus Barcelona’s Neymar, with a high-level source admitting: “A club like Manchester United must have a player who will be in the top 10 on the list to win the Ballon d’Or.”

Although he has spent in excess of £250million since summer 2014 making United title contenders once again, Van Gaal has warned he must be allowed to splash the cash again if the club’s American owners want a team capable of being champions of Europe.

United will perhaps have to double their current level of player investment to £500m to deliver the kind of big names who will pacify supporters.