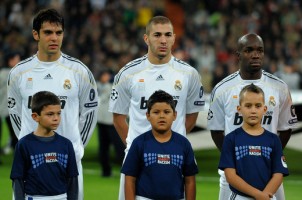 It is said that Manchester United are poised to swoop for Real Madrid’s superstars with Jose Mourinho’s appointment about to spark a fire sale.

The former Chelsea boss, who will take over at the Bernabeu in the next few days after coach Manuel Pellegrini was sacked last night, is certain to tear up the Galactico blueprint – and that’s put United on red alert.

Karim Benzema, Gonzalo Higuain, Lassana Diarra and Rafael van der Vaart have all been linked with United since the end of the season and face uncertain futures under the incoming Mourinho.

The concern for United is that with Mourinho’s appointment not yet rubber-stamped, the players up for grabs may not become immediately clear.

And with the World Cup only 15 days away, the big fear for Fergie, who would prefer to have any marquee signing in for pre-season training, is that transfer market may not get into full swing until late summer.