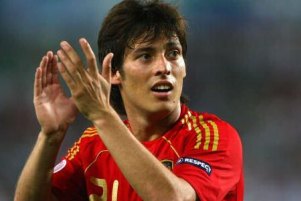 Sensational news are out and it has been reported that English Premier League champions Manchester United have made a move for Valencia winger David Silva.

Local British newspapers have reported that Silva’s representatives have told Valencia that they have received at least two firm offers for the player.

It has been said that one of those comes from Manchester United and the identity of the other club was not revealed,

Valencia have calculated that they must raise around €50 million from player transfers within the next ten months to stay afloat.