It has been reported that Thomas Muller is back on the radar of Manchester United. 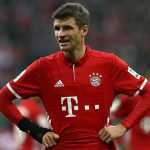 El Mundo Deportivo claims that United have been in pursuit of Bayern Munich star Muller for a few years now, but he is now ready for a move to Old Trafford.

The Bundesliga side rejected a world record bid for the World Cup winner in 2015, but with fewer minutes coming under Carlo Ancelotti, he is thought to want a move elsewhere for more regular game time.

Asked if the offer was in the £85m region, Dreeson said: “There really was something like that.

“Then came a fax from England. For us, however, a sale of Thomas Müller was never discussed.

“If a player fits us, we would be stupid to give him a short-term prospect of a record profit and to weaken him.”