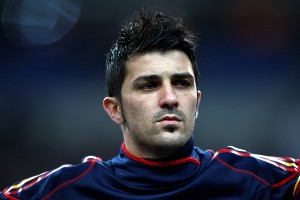 Sensational news are out and it has been reported that Manchester United want to close a deal for Valencia ace David Villa before the World Cup.

Local newspapers have reported that Manchester United have had the Spain international watched in every Valencia game this season, and are ready to steal a march on their rivals.

Sir Alex Ferguson’s brother Martin, United’s leading scout, has been on many of the spying missions – including the 4-4 Europa Cup draw at Werder Bremen last week when Villa scored a hat-trick to put Valencia into the last eight.

It’s believed that the 28-year-old striker, who will cost £40million, will finally leave Valencia this season and every major club in Europe is ready to bid for him.

However it is said that Villa is impressed by Manchester United’s brand of attacking football and Old Trafford would be his preferred choice if he comes to the Premier League .