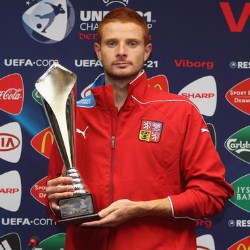 Cottagers boss Martin Jol said: “He is a very talented player. He is relatively young, aggressive, and I am happy he is on board.”

Jol added: “He is a very talented player. A good midfielder and played against England in the Under-21 European Championship. He got two assists so he is full of confidence.

“He knows he can play against English teams and that helps. He had a very good tournament and was very decisive in games.

“That gave us confidence and he has been on our radar for at least a year. The Fulham scouts knew him and had very good reports on him.”

The midfielder was named Carlsberg Man of the Match after the UEFA European Under-21 Championship Group B match against England.