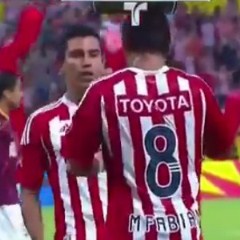 One player pretended to shoot the other in the head, sparking outrage in the country where drugs-related violence has claimed 44,000 lives.

“I greatly regret what happened. When I saw the video I was filled with anger and regret for playing around with something as sacred as the life of a human being,” De la Mora said after donating a million pesos to an orphanage in the northern border town of Ciudad Juarez.

Ciudad Juarez is one of the most violent towns in Mexico and the main drugs route into the United States.

“It’s good to celebrate in football but never like that. My respects to Mexico, for a Mexico free of violence, for the mothers and siblings of the victims,” added De la Mora.