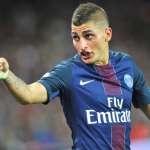 It has been revealed that PSG midfielder Marco Verratti says they’ll be up for their Champions League opener with Arsenal.

Verratti admits that Arsenal will be a big test for PSG as the French champions look to make a winning start.

He said: “Arsenal are a big club. They’re used to playing at this level. They’re always in the Champions League. They’re a team with a lot of good, technically proficient individual players.

“But I think we’ll prepare in the best way possible and we know what we have to do to cause them problems. We know what they can do, too. That might actually make the match easier. When you play against a top club, you always give 100 per cent out on the pitch.

“I prefer it like this, playing them right from the outset. You always want to play as soon as possible after not winning a game, which is why this is such a big match.

“We have to remind ourselves that we’re a top club and a top team, and that we can achieve great things. I’m delighted to be playing Arsenal. This is why we want to be at this level, playing a top club in front of a full stadium. It’s great.”