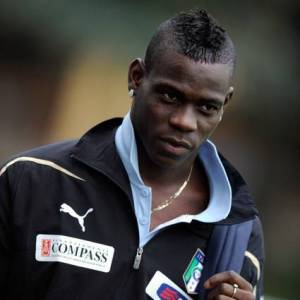 Manchester City striker Mario Balotelli has found himself in hot water once again after being spotted with AC Milan vice-president, Adriano Galliani.

The Italian international striker however has played down talk of a move to AC Milan.

Balotelli, a childhood Milan fan, attended the Derby della Madonnina as the Rossoneri saw off Inter 1-0 and later attended a restaurant frequented by Milan players and staff.

It is believed that journalists on the scene asked the pair about the meeting, but Balotelli denied suggestions he was discussing a return to the city.

“I have never said anything [about joining Milan],” Balotelli said.

“It’s only a coincidence that we were in the same restaurant. Since I left Italy, I am the friend of all the teams. It was nice that Galliani came over to say hello to me.”

Galliani added: “We don’t want to create a scene. We don’t bother players and other clubs. Balotelli is a City player and that’s it.”

Agent Mino Raiola recently told Tribu del Calcio that Balotelli was feeling “so so” at Eastlands, but he also tried to dampen the speculation: “The lad went there with his friends, but he did not have a meal with Galliani.”

Mediaset, whose vice-chairman is Milan owner Silvio Berlusconi, reports that the Rossoneri and Raiola are now working towards completing a deal for the player next summer.

Casillas Defends Jose Mourinho : I Stand By My Coach!


Zlatan Ibrahimovic Set To Be Rested For Germany Friendly