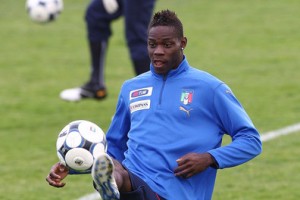 Inter Milan striker Mario Balotelli has made an extraordinarily provocative gesture by pulling on an AC Milan jersey in front of TV cameras.

Balotelli, speaking with local TV, took aim at Inter coach Jose Mourinho over his recent axing and then happily paraded in an AC Milan shirt given to him by the film crew.

The Italian striker told reporters that : “Why am I not playing? There’s no point asking me, you need to ask those who are higher up,”

“I don’t know, maybe the other players are just stronger than I am.”

Balotelli was handed a gift of a Rossoneri jersey with his name, which he held up to his chest with a broad grin.

He then pulled it on and checked himself out in the mirror wearing the shirt of Inter’s great rivals.

When the presenter told Balotelli that the fact he was frozen out and yet Inter still beat Chelsea in the Champions League made it a victory for Mourinho, he was unimpressed.

Balotelli then responded by saying that : “Whose victory was it?! No way, it was the team that won at Stamford Bridge, not Mourinho.”