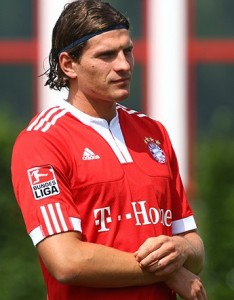 Interesting news from the Bundesliga is out and it has been reported that Bayern Munich striker Mario Gomez, the Bundesliga’s most expensive ever purchase, is already feeling insecure at his new club.

German international Gomez, who signed for more than €30 million during the close season from VfB Stuttgart, has netted six times in nine matches in all competitions this season but has frequently been substituted or left on the bench.

Gomez said after scoring in the German Cup second round against Oberhausen on Tuesday that he needs full confidence for his game.

Gomez also added that he has got enough confidence from his home but it is different when playing are at a new club and after playing the first six matches and scoring goals, he does not know why he is taken off.

After scoring Bayern’s second just before halftime against Oberhausen in their 5-0 win, Gomez was taken off to make way for Italian striker Luca Toni, returning after months out following a heel injury.

Gomez went on to say that he was brought to Bayern to get goals and being substituted makes him feel very much insecure.