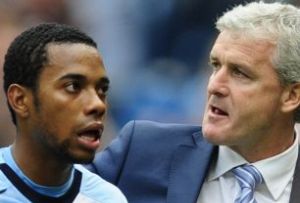 Interesting transfer news are out and it has been reported that Manchester City boss Mark Hughes is willing to listen to Barcelona over their interest in Robinho.

British newspapers have reported that Hughes is in no rush to offload the Brazil forward, but he would countenance the player’s sale in January if it paved the way for him to move for Carles Puyol or Éric Abidal, the Barcelona defenders.

It is also reported that Hughes also admires midfielder Yaya Touré, the Ivory Coast and Barcelona midfield player and brother of Kolo, the City captain.

However, he would be unavailable for several weeks in January because of the African Cup of Nations.

Diego Wants To Prove His Worth To Juventus


Henrik Larsson Wants To Return To Celtic As Coach