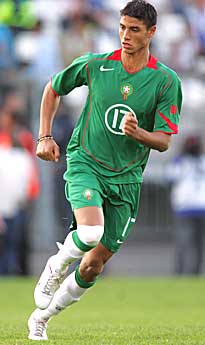 It has been reported in France that striker Marouane Chamakh believes that he will not be joining Arsenal FC to replace Emmanuel Adebayor who has joined Manchester City.

It is believed that the Morocco international striker wants to leave French side Bordeaux and claims that Fulham and Tottenham Hotspurs are the latest clubs that are chasing his signature.

The 25-year-old told reporters in France that he wants a new challenge and that he has a weakness for the English Premier League.

He also said that his dearest wish is to leave current club Bordeaux and that he has repeated it for several months and hopes that his officials will listen to his wish.

He also revealed that with his agent, they have agreed terms with several English clubs that are keen to sign him but the clubs are just waiting for his decision.

He also revealed the clubs to be interested are Sunderland, Blackburn, Tottenham and Fulham and not Arsenal. The player said that he does not believe that he will play for Arsenal as his officials are yet to receive any offer so far.

The striker also said that he has not made his decision yet and that he is studying the offers carefully. He also added that he wants to know which destination will be the best for him and when he has made his choice, the club will contact Bordeaux.