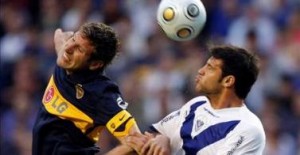 Striker Martin Palermo, who could lead Argentina’s attack in their critical World Cup qualifier against Peru on Saturday, headed a remarkable winner from 45 yards in Boca Juniors’ 3-2 victory over Velez Sarsfield.

Boca ended a run of four defeats to give coach Alfio Basile a boost while arch-rivals River Plate’s coach Nestor Gorosito resigned after his team surrendered a lead they had held until the last seven minutes to lose 2-1 at San Lorenzo.


Gary Neville Believes His England Career Is Over