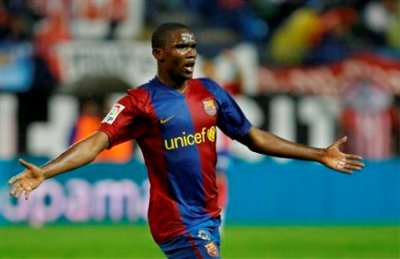 Inter Milan president Massimo Moratti has claimed that he will remain confident as he believes that he can tie up a deal for Barcelona striker Samuel Eto’o.

The Italian champions are negotiating with Cameroon international striker Eto’o and his agent with a view to bringing him to the San Siro in a swap deal which would see Zlatan Ibrahimovic move to Spanish Champions FC Barcelona.

It is also believed that Inter Milan will receive 45 million euros (£39m) and Alexander Hleb on a season-long loan if the deal falls through and Moratti said in the club’s website that until things are wrapped up, there’s nothing to say but he is very confident. He also said that Samuel Eto’o is one of the most important players on the market at the moment.

He also added that along with Ibrahimovic, Eto’o is one of the most wanted strikers in the world and that it is a good chance for Inter to have another champion on their side.

Moratti had nothing but praise for Ibrahimovic, who was the top scorer in Serie A last season and said that Zlatan is a very serious professional and has always behaved well with the club.

He also said that Zlatan helped Inter Milan win the championship and he was top scorer last year.

Sir Alex Says Carlos Tevez Is Not Worth £25million


Dubai Based Businessman Sulaiman Al Fahim To Take Over Portsmouth