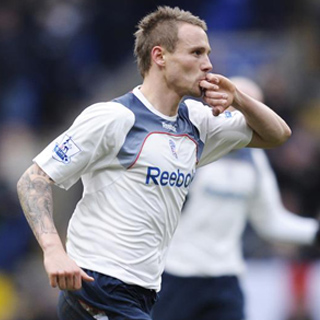 Great news for all Bolton fans as midfielder Matt Taylor has pledged his long-term future to the club by signing a one-year extension to his current contract.

Taylor now is the third member of the squad to agree a new deal and manager Gary Megson is delighted to secure his services until the summer of 2012.

With Kevin Davies and Gary Cahill recently committing their future to the club, manager Megson said that Taylor is a hard working player, who always gives his all. Megson also added that Taylor scored 10 goals last season and is a big influence with his set-pieces and his work-rate.

Taylor joined Bolton from Portsmouth in January 2008 for a fee believed to be around £4million and such was his good form last season Megson thought the 27-year-old was worthy of England recognition.

Megson added that Taylor had a key role to play last season and will again this season and that he is another member of the squad who leads by example.

Megson also said that Taylor and his family are settled in the area and that he can go from strength to strength at this club.

Megson is looking for his side to bounce back at Hull on Saturday after they lost on the opening day to Sunderland.

Jens Lehmann Wants To Retire At The End Of The Season