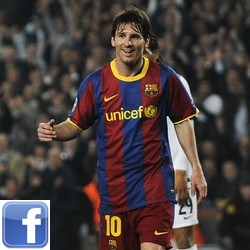 The Barcelona and Argentina star, who has won the World Player of the Year award twice, joined the social networking site on Wednesday and wrote as his first post: “I am so excited! From now on we will be more closely connected through facebook.”

Messi, who doesn’t have a Twitter account, has scored 45 goals for defending Spanish champions Barcelona this season.

Kobe Bryant : Messi Is The Best In The World!