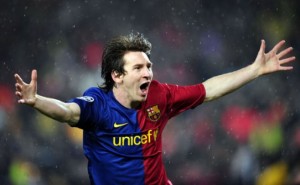 Argentina international forward Lionel Messi has backed away from claims that he is now the leader of Barcelona.

Messi said that he is just a member of an impressive group of great players and that there is no leaders in the Barcelona locker room.

Messi also added that the players are a very united group and that everyone knows what they have to do on the pitch and off it, everyone get along very well.

Messi also went on to say that everone is still learning about new teammate Zlatan Ibrahimovic. Messi added that Zlatan’s adaptation is easy because of the quality he has.

Messi also said that both him and Zlatan understand each other very well. He said that he will have to know Zlatan’s movements and Zlatan must know his movements.

Nani Can Be The Best In The World, Says Cristiano Ronaldo