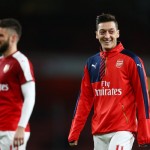 Arsenal midfielder Mesut Ozil has revealed that he developed his game as a kid with medicine balls.

While Ozil is clearly gifted with a standard size five at his feet – and pieces of chewing gum – the midfielder is adamant his willingness to experiment with other balls helped to improve his control.

“When I was younger, if I saw something lying around, I would try to juggle with it,” he told Arsenal’s official website.

“I would always go on vacation with my friends and we would always play games like two touch using a tennis ball, or play with a basketball, which is heavier than a normal ball.

“[I didn’t just play] with chewing gum or tennis balls, sometimes with basketballs or medicine balls too – even ones that are 5kg, though that is very difficult.”