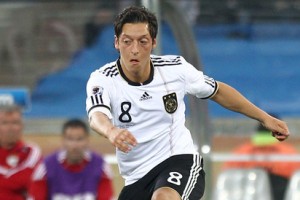 Werder Bremen and Germany international star Mesut Ozil has revealed that he is keen to make the move to the English Premier League.

Clubs such as Chelsea and Manchester City have expressed their interest in the midfielder after putting up an impressive performance for Germany at the 2010 World Cup.

The Turkish born Germany midfielder revealed that he would be open to a Premiership move although he is currently focused on Saturday’s quarter-final clash with Argentina.

Ozil said : “The World Cup is all that matters at the moment,”.

“When I get back we can think about my future, but for for now it’s not something I want to give a lot of thought to. To the top players the Premier League is attractive.

“You look at what Manchester United and Chelsea have achieved over the last five years and you see it would be easy to be successful at two clubs like that.”

Ozil also said that he would love to emulate the achievements of Germany star Michael Ballack with Chelsea but also hinted that a move to Spain’s La Liga could be an option.