Reports are out claiming that Barcelona midfielder Cesc Fabregas has hailed Arsenal’s signing of Mesut Ozil. 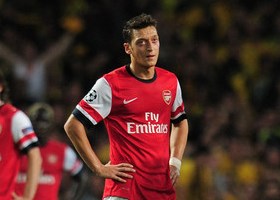 The Spanish international midfielder still talks like a fan when he analyses the players who could now finally end Arsene Wenger’s eight-year wait for a trophy… and one player in particular.

“If you have the chance to sign Mesut Ozil then you can’t let it pass you by,” he told the Daily Mail.

“He wanted to play for Arsenal. Wenger won him over and when you have the chance with a player like that it doesn’t matter if you already have seven or eight who are similar, you have to take it.”