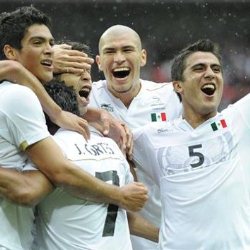 Mexico reached the men’s Olympic football final for the first time when they came from behind to beat a tired looking Japan 3-1 before more than 82,000 fans at Wembley Stadium on Tuesday and will face Brazil in Saturday’s showpiece.

Goals from Marco Fabian, Oribe Peralta and Javier Cortes, who had only been on the pitch two minutes when he scored, led to wild scenes of delight as Mexico clinched a place in the gold medal match back at Wembley.

Their next opponents Brazil swept South Korea aside 3-0 in front of 69,389 at Manchester United’s Old Trafford stadium later on Tuesday.