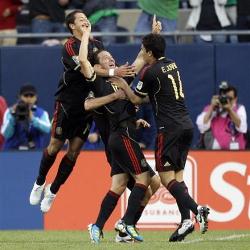 Mexico, under a cloud after five players tested positive for doping, completed an unbeaten Group A run in the CONCACAF Gold Cup with a 4-1 victory over Costa Rica on Sunday.

The win, in the shadow of the doping suspensions which they claimed was the result of contaminated food, ensured Mexico advanced to the quarter-finals.

Andres Guardado scored twice during a first-half assault that gave Mexico a 4-0 advantage by halftime. Rafael Marquez and Pablo Barrera also scored before the break.

Marcos Urena scored in the 68th minute for Costa Rica, who will also advance to the quarter-finals after finishing tied for second in Group A on four points with El Salvador but have a better goal difference.