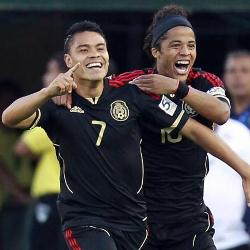 Mexico won the CONCACAF Gold Cup with a 4-2 win over the United States in a hugely entertaining final played in front of 93,000 fans in Pasadena, California.

The United States grabbed a stunning 2-0 lead within 23 minutes thanks to goals from Michael Bradley and Landon Donovan.

But Mexico fought back to go in level at the break through strikes from Pablo Barrera and Andres Guardado.

Barrera added his second to give Mexico a 3-2 lead, five minutes into the second half.

The victory, in front of an overwhelmingly pro-Mexico crowd, was sealed in style with a superb chip from the outstanding Giovani dos Santos.

The win gave Mexico their sixth Gold Cup title and ensured they will represent the CONCACAF region in the FIFA Confederations Cup in Brazil in 2013.