Michael Laudrup is convinced that Michu will step up his game for Swansea after playing for Spain this week. 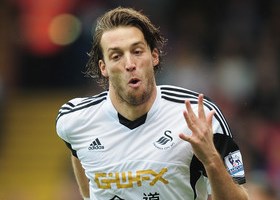 The Dane believes Swansea can only benefit from the confidence Michu will have gained from his first international experience.

“It’s huge, I would imagine for a player like Michu as the players who get to go into the national team come from the big clubs,” he said.

“In Spain the big ones are Real Madrid, Barcelona, Atletico Madrid, Valencia, Malaga, Athletic Bilbao, but he was from Rayo and then he joined us.

“Already last season there was talk about playing a friendly or two, but this was a qualifier and he started. It’s not just about the World Cup, but playing for the World and European champions.

“In the last four years they have won everything so Michu and Swansea can be very proud as it must be one of the most difficult squads to get into as a player. But that’s what happens when you are born in a country with so many good players.

“It gives you the possibility to go to the World Cup, but it means it makes it very difficult to get into the squad.”